Welcome back everyone. In my post last week I explained that a lot was done in one week, so much so that the article would take place in two parts. This is part two. So go read that one if you haven't yet. In that same week I also installed an analogue volume control knob!

What is the big deal about an analogue volume control and why is that better than just using a key combination to adjust the volume? I chose to control the volume this way for two reasons. This way the volume knob can be tuned to any amount of loudness without effecting the interactive lighting, as this adjustment is done in the chain after the lights get information from the source jack. In simpler terms this means you could have the volume turned completely down to nothing but the lights would still flash with large peaks in the sound that would be produced. The second reason I chose to do it this way is so that you could adjust the volume while in game, instead of only in the game selection menu. I know its much more current to have the CPU managing sound, but I feel like this analogue solution is a much more elegant and effective convention in this case. 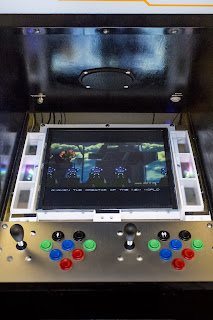 The knob itself is made out of chrome and abalone. Its probably the most attractive volume knob ever installed on anything ever, and provides a nice feeling when you turn it. Idk the thing is just special and feels quality, Much better than just hitting a button for volume up or down.

I made this happen with the use of a 10k Ohm dual ganged potentiometer that I soldered and wired myself. 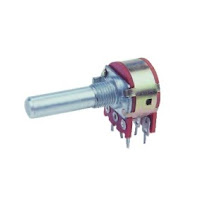 Why a dual gang pot? This way the cabinet remains in Stereo (left and right remain separated) rather than combining them down to one channel so that a standard pot could adjust the volume. Yes I know, consoles like NES and SNES are both in mono sound, but there are other consoles on here that were designed for stereo sound, and I intend to preserve quality as best as I possibly can.

So yeah, That plus the previous post was all done in a single week, and both improvements were critical steps in getting the project completed. I have big plans for February also, I'll be talking about that in the next post. So look forward for the monthly update post! Peace out.