Time to get busy again!

Hey everybody, as I said in the last post, 2015 was a great one and greatness will continue well into 2016. I have been SUPER busy this past week working specifically on this project again. I've been SO busy and made SO much progress that I'm only going to tell you about half of the changes in this post. That's right, this is a two part article, a particle.

So the part I want to tell you about is a light divider/mounting space I made for the sides of the screen. The final design will have flashing back lights on the screen cover's boarder, I designed this part without any 3d modeling software. Just good old fashion pen and paper. Its fun to do things the hard way sometimes. 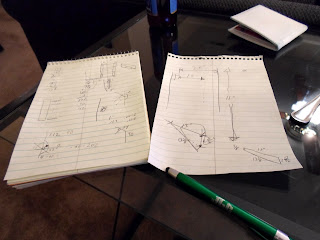 Basically those scribbles produced this.

Okay, so yeah. What the hell is that? Well let me tell you. That is a cut-contour vector-file for a multi-thousand dollar cutting tool made by a company from freakin Norway. Wow. I called in some of my connections on this one. The end result was this... 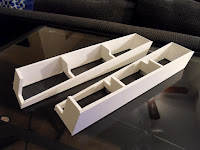 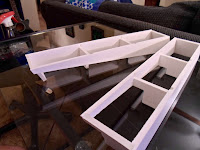 Okay so what does this thing do? Actually it does some really important stuff. The way the back lights work is that different colored lights will be on at different times and in order for it to look good, it is important that the colors dont bleed over each other and get muddy/over bright. This molding will make it so that each light bank will illuminate only a section of the screen cover and allow only just enough color bleed so that it looks good.

These dividers are a weird shape because the wooden portion of the screen mount sits at a 158 degree angle from origin while the other half made out of metal and pvc sits at 152 from origin so that it faces the player more naturally. These dividers need to fit perfectly into both angles at the same time.

Also I wanted to show this awesome thing off. My girlfriend and also main graphical designer/photographer for the project made this for me at christmas! So cool.